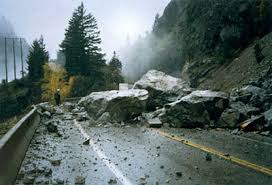 When the gravitational force acting on a slope exceeds its resisting force, slope failure (mass wasting) occurs. The slope material’s strength and cohesion and the amount of internal friction between material help maintain the slope’s stability and are known collectively as the slope’s shear strength. The steepest angle that a cohesionless slope can maintain without losing its stability is known as its angle of repose. When a slope possesses this angle, its shear strength perfectly counterbalances the force of gravity acting upon it.Mass wasting, also known as slope movement or mass movement, is the geomorphic process by which soil, sand, regolith, and rock move downslope under the force of gravity. Types of mass wasting include creep, slides, flows, topples, and falls, each with its own characteristic features, and taking place over timescales from seconds to years. Mass wasting occurs on both terrestrial and submarine slopes, and has been observed on Earth, Mars, Venus, and Jupiter’s moon Io.

Mass wasting may occur at a very slow rate, particularly in areas that are very dry or those areas that receive sufficient rainfall such that vegetation has stabilized the surface. It may also occur at very high speed, such as in rock slides or landslides, with disastrous consequences, both immediate and delayed, e.g., resulting from the formation of landslide dams.

Factors that change the potential of mass wasting include: change in slope angle; weakening of material by weathering; increased water content; changes in vegetation cover; and overloading.

The importance of water in Mass Movement

Although water is not directly involved as the transporting medium in mass-wasting processes, it does play an important role. Think about building a sandcastle on the beach. If the sand is totally dry, it is impossible to build a pile of sand with a steep face like a castle wall. If the sand is somewhat wet, however, one can build a vertical wall. If the sand is too wet, then it flows like a fluid and cannot remain in position as a wall.

Water can increase or decrease the stability of a slope depending on the amount present. Small amounts of water can strengthen soils because the surface tension of water gives the soil a lot of cohesion. This allows the soil to resist erosion better than if it were dry. If too much water is present the water may act to increase the pore pressure, reducing friction, and accelerating the erosion process and resulting in different types of mass wasting (i.e. mudflows, landslides, etc.). A good example of this is t

Types of mass movement are distinguished based on how the soil, regolith or rock moves downslope as a whole.

Soil creep is a long term process. The combination of small movements of soil or rock in different directions over time are directed by gravity gradually downslope. The steeper the slope, the faster the creep. The creep makes trees and shrubs curve to maintain their perpendicularity, and they can trigger landslides if they lose their root footing. The surface soil can migrate under the influence of cycles of freezing and thawing, or hot and cold temperatures, inching its way towards the bottom of the slope forming terracettes. This happens at a rate that is not noticeable to the naked eye.

A landslide, also called a landslip, is a rapid movement of a large mass of earth and rocks down a hill or a mountainside. Little or no flowage of the materials occurs on a given slope until heavy rain and resultant lubrication by the same rainwater facilitate the movement of the materials, causing a landslide to occur. The common forms of landslides are slump, debris slide, rock slide, rock fall, debris fall and avalanche.

Movement of soil and regolith that more resembles fluid behavior is called a flow. These include avalanches, mudflows, debris flows, earth flow, lahars and sturzstroms. Water, air and ice are often involved in enabling fluidlike motion of the material.

Topples are instances when blocks of rock pivot and fall away from a slope.

A slipping of coherent rock material along the curved surface of a decline. Slumps involve a mass of soil or other material sliding along a curved surface (shaped like a spoon). It forms a small, crescent-shaped cliff, or abrupt scarp at the top end of the slope. There can be more than one scarp down the slope.

A fall, including rockfall, is where regolith cascades down a slope, but is not of sufficient volume or viscosity to behave as a flow. Falls are promoted in rocks which are characterised by presence of vertical cracks. Falls are a result of undercutting of water as well as undercutting of waves. They usually occur at very steep slopes such as a cliff face. The rock material may be loosened by earthquakes, rain, plant-root wedging, expanding ice, among other things. The accumulation of rock material that has fallen and resides at the base of the structure is known as talus.

Soil and regolith remain on a hillslope only while the gravitational forces are unable to overcome the frictional forces keeping the material in place (see Slope stability). Factors that reduce the frictional resistance relative to the downslope forces, and thus initiate slope movement, can include: 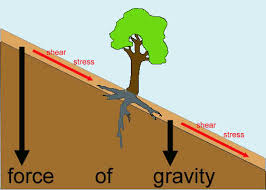 Gravity is the force behind these movements.

I am Rashid Aziz Faridi ,Writer, Teacher and a Voracious Reader.
View all posts by Rashid Faridi →
This entry was posted in earth and tagged CLIMATE, Environment, nature, science, transportation, types of mass wasting. Bookmark the permalink.