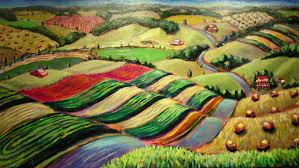 Practice of tilling sloped land along lines of consistent elevation in order to conserve rainwater and to reduce soil losses from surface erosion. These objectives are achieved by means of furrows, crop rows, and wheel tracks across slopes, all of which act as reservoirs to catch and retain rainwater, thus permitting increased infiltration and more uniform distribution of the water.

Contour farming is growing crops “on the level” across or perpendicular to a slope rather than up and down the slope. The rows running across the slope are designed to be as level as possible to facilitate tillage and planting operations on the contour.

Contour farming has been practiced for centuries in parts of the world where irrigation farming is important. Although in the United States the technique was first practiced at the turn of the 19th century, straight-line planting in rows parallel to field boundaries and regardless of slopes long remained the prevalent method. Efforts by the U.S. Soil Conservation Service to promote contouring in the 1930s as an essential part of erosion control eventually led to its widespread adoption.

The practice has been proved to reduce fertilizer loss, power and time consumption, and wear on machines, as well as to increase crop yields and reduce erosion. Contour farming is most effective when used in conjunction with such practices as strip cropping, terracing, and water diversion.

Stripcropping is growing strips of row crops such as corn and soybeans alternate in a planned rotation with equal-width strips of close-growing crops such as forages, small grains or sod, all arranged systematically across a field.

In contour stripcropping, crop strips alternate down a slope on the contour (across or perpendicular to the slope) to reduce soil erosion and runoff.

In cross-wind stripcropping, crop strips are straighter and arranged perpendicular to the prevailing wind direction to reduce soil erosion by wind.

Keep valuable topsoil in place on sloping fields and slows down erosion.Slow water down and let it soak into the soil.Iimprove irrigation systems and conserve water.Reduce labor and make harvesting easier.Improve the appearance of the farm.