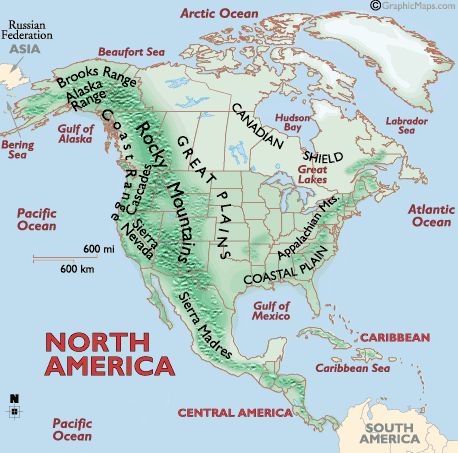 Young mountains are found in the west. The most familiar of these mountains are the Rockies, North America’s largest chain. The Rockies stretch from the province of British Columbia, Canada, to the U.S. state of New Mexico.

Volcanic mountain ranges in Guatemala, Honduras, Nicaragua, Costa Rica, and Panama are also considered part of the Cordilleras. Volcanic eruptions and earthquakes occur frequently in this region. It contributes to the rich, fertile soils of the region.

The temperate rain forest supports a wide variety of life. The Sitka spruce, western red cedar, and Douglas fir are trees native to North America’s temperate rain forest. Some of these trees grow to more than 90 meters  tall and 3 meters  in diameter. Black bears, Roosevelt elk, and marmots are indigenous animal species.

The Great Plains lie in the middle of the continent. Deep, rich soil blankets large areas of the plains in Canada and the United States. Grain are  grown ba plenty  in this region hence it is called the “Breadbasket of North America,”. The region  feeds a large part of the world. The Great Plains are also home to rich deposits of oil and natural gas.

The grassland or prairie regions of the Great Plains make up the largest biome in North America. Extreme weather prevents the growth of large plants but is perfectly suited to the native grasses that dominate the region.

Native grasses vary in size from 2 meters in tall grass prairies to only 20 or 25 centimeters in short grass prairies. Native animal species include bison, prairie dogs, and grasshoppers.

The Tundra, stretching along the northern borders of Alaska and Canada to the Hudson Bay area, is a biome common to the Canadian Shield. Tundra is where low temperatures and precipitation levels hinder tree growth. The tundra is characterized by permafrost—soil that is frozen for two or more years. This permafrost keeps moisture near the soil’s surface, promoting vegetation growth even in the extreme, Arctic conditions of the tundra.

During the summer, this top layer of soil thaws less than 10 centimeters (only a few inches) down, forming numerous shallow lakes, ponds, and bogs. Lichens, mosses, algae, and succulents take advantage of these shallow waters. In turn, they provide food for the caribou and musk ox that are typical of this area.

This varied region includes the Appalachian Mountains and the Atlantic coastal plain.North America’s older mountain ranges, including the Appalachians, are near the east coast of the United States and Canada.
The Atlantic coastal plain extends from river, marsh, and wetland regions east of the mountains toward the sandy beaches of the Atlantic coast. Wetland areas are a biome of the eastern region and consist of areas of land whose soil is saturated with permanent or seasonal moisture. The Florida Everglades is the largest wetland system in the United States, covering more than 11,137 square kilometers) of southern Florida.

The Everglades is a biologically diverse region and contains several bordering ecosystems. Sawgrass marshes are the most iconic plant community of the Everglades and thrive on the slow-moving water of the wetlands. Alligators nest in the sawgrass, while wading birds such as egrets, herons, spoonbills, and ibises make their breeding grounds in other wetland tree species, such as cypress and mangrove.

The Caribbean Region includes more than 7,000 islands, islets, reefs, and cays. The region’s islands and smaller islets are varied in their topography; some have relatively flat and sandy terrain while others are rugged, mountainous, and volcanic.

The coral reefs and cays of the Caribbean Sea are among the most spectacular biomes in North America. A reef is a ridge of jagged rock, coral, or sand just above or below the surface of the sea. Some coral reefs surround islands, such as the Bahamas, Antigua, and Barbados. Others are found off the Florida Keys (a low bank or reef of coral, rock, or sand.