Ley farming is an agricultural system where the field is alternately seeded for grain and left fallow. Another name for the method is “alternate husbandry”.

In ley farming, the field is alternately used for grain or other cash crops for a number of years and “laid down to ley” i.e. left fallow, used for growing hay or used for pasture for another number of years. After that period it is again ploughed and used for cash/field crops. 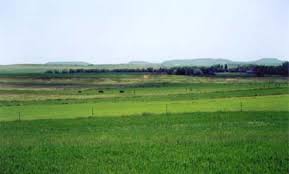 During the fallow/pasture period the soil is filled with roots of grasses and other plants. New ploughing mixes them with the soil and also increases the amount of nitrogen in the ground especially when leguminous forages are used, as these have the ability of fixing atmospheric nitrogen into the soil via the help of bacteria living symbiotically in their root nodules, removing need of artificial nitrogen fertilizers. It also disturbs the life cycle of pests.

It can work as an an alternate farming system for sustainability in the  arid zone.

I am Rashid Aziz Faridi ,Writer, Teacher and a Voracious Reader.
View all posts by Rashid Faridi →
This entry was posted in BIODIVERSITY, Environment, Food, food security, Natural Resources. Bookmark the permalink.