Posted on November 26, 2018 by Rashid Faridi
Urban Environments are complex interacting systems constantly adopting to changes in technology, culture and science. In order to understand how they evolved one must look at the structure. In 1924 Burgess gave the first model explaining the social and economic structure of an urban area.
His model was very simple and showed how a city grows from a  central point in a series of rents.

Key (from outside to inside)

The concentric zone model, also known as the Burgess model or the CCD model, is one of the earliest models to explain urban social structures. It was created by sociologist E. W.Burgess in 1925.

Based on human ecology theory done by Burgess and applied on Chicago, it was the first to give the explanation of distribution of social groups within urban areas. This concentric ring model depicts urban land usage in concentric rings: the Central Business District (or CBD) was in the middle of the model, and the city expanded in rings with different land uses. It is effectively an urban version of Von Thünen’s regional land use model developed a century earlier. It influenced the later development of Homer Hoyt’s sector model (1939) and Harris and Ullman’s multiple nuclei model (1945).

The zones identified are: 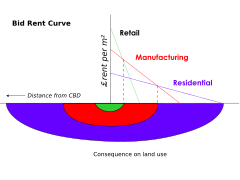 Burgess’s work helped generate the bid rent curve. This theory states that the concentric circles are based on the amount that people will pay for the land. This value is based on the profits that are obtainable from maintaining a business on that land. The center of the town will have the highest number of customers so it is profitable for retail activities. Manufacturing will pay slightly less for the land as they are only interested in the accessibility for workers, ‘goods in’ and ‘goods out’. Residential land use will take the surrounding land.

The model has been challenged by many contemporary urban geographers. First, the model does not work well with cities outside the United States, in particular with those developed with a history. Even in the United States, because of changes such as advancement in transportation and information technology and transformation in global economy, cities are no longer organized with clear “zones” .

I am Rashid Aziz Faridi ,Writer, Teacher and a Voracious Reader.
View all posts by Rashid Faridi →
This entry was posted in Class Notes, earth, urban morphology, Urban Studies. Bookmark the permalink.

1 Response to Concentric Zone model or CCD Model of Burgess