The Question which first arises is-Where did the first people in North America came from? 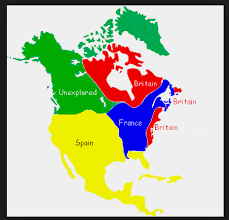 According to one theory, nomads crossed land bridge from Asia to Alaska and settled in N. America.

According to another theory, nomads from Central and South America settled in N. America at the same time as the people from Asia. 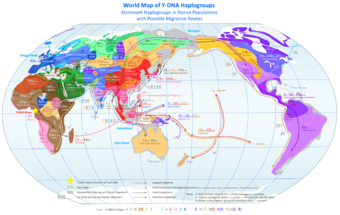 Many European groups came to N. America and settled here in colonies. Following is a brief description of their settlement and colonies:

In 1763, France gave much of its land to Britain after the French and Indian War. English migrate west and push Native Americans off their land. U.S.A. was created in 1776 with the Declaration of Independence; fought and won independence in American Revolution. Americans set up a republic in which the people elect their own officials.

In the south, enslaved Africans provided labor on southern plantations. Underground Railroad and a series of safe houses, helped many slaves make their way north to freedom.

The population of the continent of North America has gone enormous change in size, geographic distribution, and ethnic composition over the past several Centuries. It has grown from a few million, largely rural inhabitants on the eve of Columbus’s arrival to approximately million, substantially urban residents at the end of the twentieth century. From once composed entirely of Native Americans, the population now changed the structure and now includes most ethnic groups from around the globe.

These changes were caused by substantial immigration from Europe, Africa, and Asia, and by significant shifts in fertility and mortality. Life expectancy has substantially increased and this has marked impact on structure of the populace.

Population growth and redistribution have had numerous implications for economic, political, and social history. For example, the aboriginal population was decimated by disease and warfare following the arrival of Europeans and their colonial empires in the sixteenth and seventeenth centuries. Conflict within the United States and between the United States and other countries accompanied westward expansion in the nineteenth century. And women took on new roles inside and outside the home during the transition from a high-fertility rural way of life in the nineteenth century to low-fertility urban living in the twentieth century.

The U.S. and Canada have been shaped by immigration – the movement of people into one country from another. Most people in US and Canada are immigrants or descendants of immigrants. Native Americans are believed to have  first came to North America from Asia thousands of years ago through the Berring Land Bridge.

Due to the impact of migration,U.S. and Canada are among the most diverse populations in the world. The people of United States often called it the ‘Melting Pot’

Some of the reasons why people came to U.S. and Canada:

(Click here for the population distribution of North America)

North America has an estimated 2016 population of over 565 million, which is based on national estimates from its 23 independent states but does not take into account non-sovereign territories like Bermuda, the British Virgin Islands and Puerto Rico.

The United States also has a population in 2016 that is more than double that of Mexico, the second most populous country in North America with just over 21% of the continent’s population. Canada has a mere 6% of North America’s population, and no other country accounts for more than 3% after these three.

The ten most populous countries in North America are:

Saint Kitts and Nevis is the smallest sovereign state in the entire Americas, both in terms of size and population. This federal two-island country in the West Indies has a population of just under 55,000 in 2016.

Most Populous Cities in North America

Comparison to Other Continents

North America has seen a great deal of growth in its many megapolitan areas, including the ten listed above. The United States alone has 11 megaregions that transcend international borders, comprising Mexican and Canadian metropolitan regions. Like many areas of the world, much of North America is experiencing high rates of urbanization that is expected to continue.

North America as a whole has a current population growth rate of just under 1% annually, with a birth rate that is nearly double the death rate. In 2013, the United Nations population division changed its forecast for the world population upward to 11.2 billion in 2100, as they found that fertility rates in many developing countries are not slowing as expected. While they increased their forecast for many regions, especially Latin America and Africa, they reduced their forecasts for North America.

It’s estimated that by 2050, the population of North America will be approximately 685 million. The region has  15% of World Population.

Canada has 8 people per mile.

The growth history of Canada’s population is interesting and has been influenced in many different ways, such as indigenous populations, expansion of territory, and human migration. Canada has been predisposed to be a very open society with regards to immigration, which has been the most important factor in its historical population growth.Canadians comprise about 0.5% of the world’s total population,with an estimated population of 36,286,425  in 2016.90% live along the border with the US.

The American population almost quadrupled during the 20th century—at a growth rate of about 1.3% a year—from about 76 million in 1900 to 281 million in 2000. It reached the 200 million mark in 1968, and the 300 million mark on October 17, 2006.Population growth is fastest among minorities as a whole, and according to the Census Bureau’s estimation for 2012, 50.4% of American children under the age of 1 belonged to minority groups.

I am Rashid Aziz Faridi ,Writer, Teacher and a Voracious Reader.
View all posts by Rashid Faridi →
This entry was posted in Class Notes, Countries, earth, Population. Bookmark the permalink.