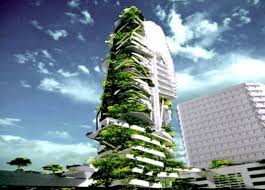 By the year 2050, nearly 80% of the earth’s population will reside in urban centers. Applying the most conservative estimates to current demographic trends, the human population will increase by about 3 billion people during the interim. An estimated 109 hectares of new land (about 20% more land than is represented by the country of Brazil) will be needed to grow enough food to feed them, if traditional farming practices continue as they are practiced today. At present, throughout the world, over 80% of the land that is suitable for raising crops is in use (sources: FAO and NASA). Historically, some 15% of that has been laid waste by poor management practices. What can be done to avoid this impending disaster?

Vertical farming is a concept that argues that it is economically and environmentally viable to cultivate plant or animal life within skyscrapers, or on vertically inclined surfaces. The idea of a vertical farm has existed at least since the early 1950s and built precedents are well documented by John Hix in his canonical text “The Glass House”.

Irrespective of their origins, there are three classifications debated by contemporary scholars.

Here is a Video on this concept

Vertical farming relies on the use of various physical methods to become effective. Combining these technologies and devices in an integrated whole is necessary to make Vertical Farming a reality. Various methods are proposed and under research. The most common technologies suggested are:
Greenhouse
The Folkewall and other vertical growing architectures
Aeroponics / Hydroponics / Aquaponics
Composting as a Waste to Energy Method
Grow light
Phytoremediation
Skyscraper

I am Rashid Aziz Faridi ,Writer, Teacher and a Voracious Reader.
View all posts by Rashid Faridi →
This entry was posted in BIODIVERSITY, Cities, opinions and tagged Environment, nature, science, traditional farming practices. Bookmark the permalink.

3 Responses to Vertical Farming:Agriculture of Future