Interview With Poverty-Beggars of India : Perspective by K. L. Kamat

Not so long ago in India, on Saturdays and Mondays every beggar who showed up at the door was given a measure of rice or juvar. The guru-bhakta who went worshiping to the temple on Thursdays, got a handful of goodies and money. The beggar community feels that due to the increase in mankind’s selfishness and small-mindedness, they are not able to make a living. The government through its policies has not helped them either. “Like prostitution, begging is oldest profession  on earth. Although varying by geography and the times, begging is universal. We have heard that even richest countries like America have beggars in one form or another,” is the argument of the beggars.

The intellectuals for long have been intrigued by mankind’s attraction to living by panhandling. Why do able bodied, working people take up begging? Why do Bengali refugees return to starving Bengal after assisted relocation? Why have we failed to settle vagabond tribes like the Bhils and Mogalayas?

It is not easy to give up the skills of earning a livelihood. Even if you protect a prostitute in an

ashram, the social reformers opine that she does not forget her easy life and in some form or another resumes old habits. Similarly I’m not surprised at the attitude of the officials of the  “Panhandling Elimination Department”, which is one of apathy and lacking sincerety.
Varieties of Begging

It is very difficult to generalize how and where panhandling begins in the life of a beggar. Some inherited from their ancestors. There are all kinds of beggars whose period of begging spans from five minutes to fifty years. A boy was begging for peanuts on the street, but when someone offered him money, he refused. “I like peanuts,” he said ran away – his needs being very specific. The eight year old of a maid-servant who was instructed to play outside was begging the passers by for small change and bought candy. When I asked a strongly built man why he couldn’t work, I was told that he was merely continuing  his family tradition!

Generally, the elderly, the disabled, and the unemployed take to begging. Folks who were robbed during their pilgrimage, temporarily beg to return home. The lepers and destitute graduate to this profession. From beggars who cry in front of you asking for food to entertainers who beg with the help of pets and children, most homeless fall into the category of beggars with more or less the same yard stick.

Just like lawyers, administrators and athletes, the beggars can be very professional. They guard their constituencies with  great care. It is common to fight over territories. The beggar who beggars in front of Ganesh hotel cannot go and beg in front of  Krishna hotel! When an unassuming new comer from a village stuck out his hand in front of the temple, he was chased away and had to go to Saibaba ashram for shelter. Although the beggars do not have an association or union, they unite to defend their sources of income.

While the beggars of the temples, churches, and mosques need not travel, the beggars of shops and households have to wander a lot. The beggars have to care about their attire just like actors and performers. People who beg in the name of the religion have to grow beard, wear saffron (kavi) clothes and ash. The fortune teller Bhils wear peacock feathers and other make-ups. The Budabudakis who do not know about their next meal, but can tell customers what lies in the decades to come wear Zari Rumal, and apply ash on the forehead to give them a holy look. Devadasis  wear turmeric powder, flowers, and kumkum. The transvestites (impotent men dressed as women) have altogether different, yet distinct style. They are clean shaven and apply fashionable cosmetics. They have acquired artificial feminine postures and dances. The beggars who use animals for fund raising have to decorate their pets, too. They have to buy caps for the monkey, jingle bells for the cow, and decorative clothing for the bull. 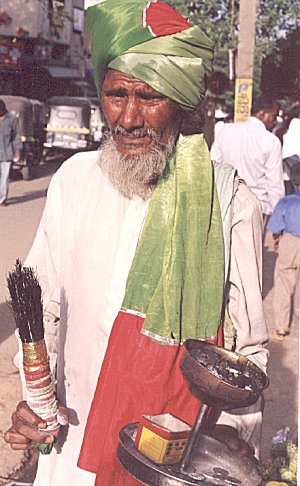 Beggar by choice: A Sufi fakir seeks alms on the street

The beggars have to master the art of begging just as they have to master the art of dressing up. They realize that it is very difficult to refuse a hungry man begging just as you come out of a popular restaurant. While a woman begs in the name of her husband who is in the death bed in a hospital, it is not uncommon that the husband is begging in his wife’s name on the next street. A pregnant woman will say that her previous child has died, and she needs money for the funeral. Her heart-rendering appeal fetches good money, yet nobody knows if any of her six children has died. An entire family will beg saying they lost everything in the floods. The children and women in scanty clothing will be sleeping on the road side and the head of the household blocks the passers-by for  small change. 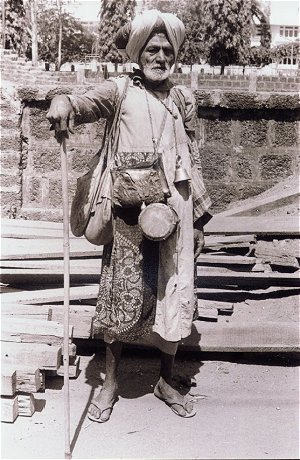 Attire of a Professional Beggar

Notice his drums and bells. He’s carrying everything that he owns.The beggars are fairly well-organized although they not unionized. They view  new beggars with suspicion and try to find out his/her depth by typical questionnaires. They have a means of estimating and budgeting income and expenses. A small town beggar has a hard time to raise two to three Rupees per day while a city beggar can easily earn ten bucks. During the festivals, they could earn as much as thirty Rupees (the time of this writing). For commoners, this may look like a paltry sum, but we have to understand that the beggars do not have any expenses. . No rent, no groceries to buy. The leftovers from the restaurants is their dinner; else every beggar  typically has a godmother who never refuses food for him/her. The roadside food courts typically provide discount prices to beggars. They travel in buses which have friendly conductors, without tickets and they always know that temples/churches/railway stations can be used for toilet and sleeping. Since they do not have a safe place to keep money, they carry with them all the time. I know of an old beggar lady who passed away and they found her shawl embedded with currency notes which amounted to two thousand rupees. 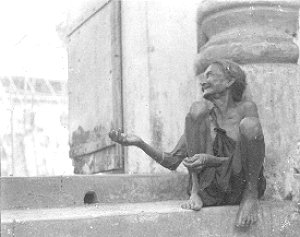 A beggar at the Mangeshi temple, Goa

The beggars need protection just like everyone. They especially need protection of their savings and begging zones. Often there are these self-style beggar leaders who enforce the rules. There is no rule to pay him money for his leadership. You can provide a hot cup of coffee once in a while. There are even beggar gangs whose leader takes a bigger share, but distributes among the members. The team of blind men and the team of transvestites belong to this category. The beggars at the railway stations and bus stands are usually dominated by thugs who run begging rackets. There are these goondas who liberate beggars from rehabilitation centers and send them back to the streets for begging.

Slums are Manifestations of Urban Poverty