According to Urban Dictionary,Serious leisure is the systematic pursuit of an amateur, hobbyist, or volunteer activity sufficiently substantial, interesting, and fulfilling for the participant to find a (leisure) career there acquiring and expressing a combination of its special skills, knowledge, and experience. The term was coined by Robert A. Stebbins.
Examples include amateur musicians, athletes, scientists, and entertainers. Among the hobbyists are collectors and people who make things (e.g., quilts, furniture, pastries). Serious leisure volunteers are found, among other places, serving in hospitals, nonprofit organizations, museums, and zoos.

The serious leisure perspective” (SLP) is the name of the theoretic framework  that bridges and synthesizes three main forms of leisure, known as serious leisure, casual leisure, and project-based leisure. Research began in 1973 on the first of these, and has continued since that time, while work on casual leisure and then on project-based leisure came subsequently (see History section of this site for more details). Within each form, a variety of types and subtypes have also emerged over the years. That this Perspective takes its name from the first of these should, in no way, suggest that it is to be regarded, in some abstract sense, as the most important or superior of the three. Rather, the Perspective is so titled, simply because it got its start in the study of serious leisure; such leisure is, strictly from the standpoint of intellectual invention, the godfather of the other two. A map of the SLP is available at the SLP Diagrams page of this website.

Leisure is defined in the SLP as un-coerced, contextually framed activity engaged in during free time, which people want to do and, using their abilities and resources, actually do in either a satisfying or a fulfilling way (or both).

Serious leisure is the systematic pursuit of an amateur, hobbyist, or volunteer core activity that is highly substantial, interesting, and fulfilling and where, in the typical case, participants find a career in acquiring and expressing a combination of its special skills, knowledge, and experience (Stebbins, 1992, p.3). The adjective “serious” (a word Stebbins’ research respondents often used) embodies such qualities as earnestness, sincerity, importance, and carefulness. This adjective, basically a folk term, signals the importance of these three types of activity in the everyday lives of participants, in that pursuing the three eventually engenders deep self-fulfillment.

Amateurs are found in art, science, sport, and entertainment, where they are inevitably linked, one way or another, with professional counterparts who coalesce, along with the public whom the two groups share, into a three-way system of relations and relationships. By contrast, hobbyists lack the professional alter ego of amateurs, although they sometimes have commercial equivalents and often have small publics who take an interest in what they do. The professionals are identified and defined in (economic rather than sociological) terms that relate well to amateurs and hobbyists, namely, as workers who are dependent on the income from an activity that other people pursue with little or no remuneration as leisure (see Stebbins, 2007, pp. 6-8).

Hobbyists are classified according to five categories: 1) collectors, 2) makers and tinkerers, 3) activity participants (in noncompetitive, rule-based, pursuits such as fishing and barbershop singing), 4) players of sports and games (in competitive, rule-based activities with no professional counterparts like long-distance running and competitive swimming) and 5) the enthusiasts of the liberal arts hobbies, which are primarily reading pursuits.

Occupational devotees are people who are inspired by“occupational devotion,” by a strong, positive attachment to a form of self-enhancing work, where the sense of achievement is high and the core activity (set of tasks) is endowed with such intense appeal that the line between this work and leisure is virtually erased (Stebbins, 2004b). “Devotee work” is serious leisure from which the worker gains a livelihood. 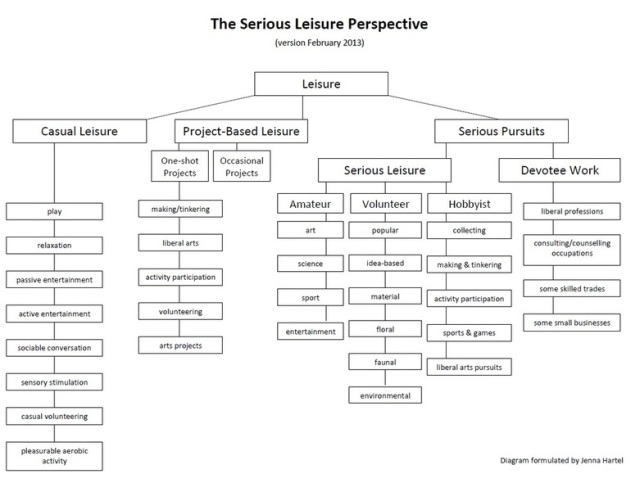 Serious leisure is further distinguished from casual leisure by six characteristics found exclusively or in highly elaborated form only in the first. These characteristics are: 1) need to persevere at the activity, 2) availability of a leisure career, 3) need to put in effort to gain skill andknowledge, 4) realization of various special benefits, 5) unique ethos and social world, and 6) an attractive personal and social identity.

Casual leisure is immediately, intrinsically rewarding; and it is a relatively short-lived, pleasurable activity requiring little or no special training to enjoy it. It is fundamentally hedonic; it is engaged in for the significant level of pure enjoyment, or pleasure, found there (Stebbins, 1997). It is also the classificatory home of much of the deviant leisure discussed by Rojek (1997, pp. 392-393). Among its types are: play (including dabbling), relaxation (e.g., sitting, napping, strolling), passive entertainment (e.g., TV, books, recorded music), active entertainment (e.g., games of chance, party games), sociable conversation, and sensory stimulation (e.g., sex, eating, drinking). Casual volunteering is also a type of casual leisure as is “pleasurable aerobic activity,” or casual leisure requiring effort sufficient to cause marked increase in respiration and heart rate (Stebbins, 2004a). Casual leisure is considerably less substantial, and offers no career of the sort just described for serious leisure. In broad, colloquial language casual leisure, hedonic as it is, could serve as the scientific term for doing what comes naturally. Yet, despite the seemingly trivial nature of most casual leisure, I argue elsewhere that it is nonetheless important in personal and social life (Stebbins, 2001b).

Project-based leisure is a short-term, moderately complicated, either one-shot or occasional, though infrequent, creative undertaking carried out in free time (Stebbins, 2005). Such leisure involves considerable planning, effort, and sometimes skill or knowledge, but for all that is not of the serious variety nor intended to develop into such. Nor is it casual leisure. The adjective “occasional” describes widely spaced undertakings for such regular occasions as arts festivals, sports events, religious holidays, individual birthdays, or national holidays while “creative” stresses that the undertaking results in something new or different, showing imagination, skill, or knowledge. Although most projects would appear to be continuously pursued until completed, it is conceivable that some might be interrupted for several weeks, months, even years.