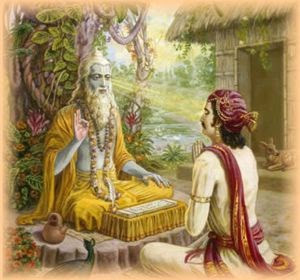 We in India often talk about Guru Shishya Parampara of ancient India. We  often say that the system was better than today’s system.Our education system was somewhat different in ancient times. When world was establishing first universities our focus was on Guru Shishya Learning. We made some great universities like Nalanda and Taxshila but perhaps the main thrust was on this parampara. It was individualized learning.  Though its is nostalgic to say that our system was and is best, and with changing map of India the system must have changed certainly. All systems have their pros and cons,but certainly there must be some lessons to be learnt.

Several scholars and social commentators are making the link between the rising tide of overt nationalism and a discomfort over the democratic nature of some educational spaces in India today. Janaki Nair, the feminist and historian from JNU, wrote in The Hindu that:

“The moral panic that has gripped large sections of the Indian public is… related to the fears about the democratising opportunities offered by campuses today. In this expression of outrage, the newly moralising Right ….. aims to replace critical thinking with worship, forms of hard-won equality with structures of deference, and forms of new community-building with a return to the ideal of the patriarchal “family”.”

She goes on to cite an example that is a bit uncomfortable for me. She sees in the Indian Council of Historical Research’s program to institute fellowships that will foster a Guru-Shishya parampara a patriarchal design. She says that shishyas will be tied in “a relationship of obedience and honour, rather than thinking and debating”. She sees this as a problem.

While I buy her point about the important place of critique and question in the process of learning (refer my earlier post on this issue), I’m not sure her understanding of guru shishya parampara is accurate. I’m no authority on the subject, but I’ve been a shishya, first of Hindustani classical music for many years and in recent years of kathak. In these years, I’ve interacted with many gurus and shishyas, heard many stories of how the gurus learnt and experienced first hand the complexity of this relationship and my comments are limited to the learning of the performing arts.

The relationship between the guru and shishya has some prescribed rules. Broadly, the shishya is expected to train rigorously and usually has limited freedom until this period of training is completed. This period may vary. Modern gurus permit their shishyas to perform in public much earlier than what was the norm a generation ago. Once the shishya is past her training period, she is not only free to make her own adaptations and improvisations to her art but is in fact expected to do so, while taking the traditions of her guru and gharana forward. A good guru will appreciate out of the box thinking, though the tolerance to deviating from the gharana’s essential style may vary. In the classical arts, learning is a lifelong process. In the traditional form of the gurukul, theoretical training involved both reading and debates among students and with the guru. The education was not designed to be a one-way dictatorial process and Prof Nair seems to imagine, though the status of theguru was (and is) undoubtedly exalted, with respected to her many years of rigorous sadhnaand the exalted knowledge derived from this.

There are many positives to this model in my view – a long period of sustained interaction, an expectation of commitment, peer-to-peer learning and the setting of high standards. I do not believe the guru shishya parampara is in conflict with freedom of expression or dissent; yes, it is a system in which charting your own path comes after years spent learning the basics and that is the nature of the kind of knowledge the system was designed to impart.

In today’s far more transactional education system, with its short-term targets and restricted rather than expansive curriculum, the guru shishya parampara often finds itself out of sync. That I do perceive. I also feel that our dislike of religion-based politics must not blind us to the positive aspects of our traditions. And so, instead of writing it off, we must reflect on how to weave in some of its positives into our discourse on pedagogy and education.

Hope on Waves in Varanasi

We are Marching Towards Knowledge and Information Society

I am Rashid Aziz Faridi ,Writer, Teacher and a Voracious Reader.
View all posts by Rashid Faridi →
This entry was posted in Discussions, Education, Learning Initiative, Links, opinions. Bookmark the permalink.