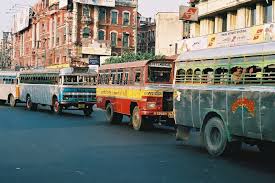 Calcutta , now Kolkata,was established in 1960 born out of a factory built by the East India Company. In 1927, a municipal corporation for Calcutta, headed by a Mayor was established. Between 1774 and 1911, it was officially the capital of British Empire in India. In the later half of the nineteenth century, a filtered water supply, underground drainage, a network of roads, and other improvements were planned and built. Up to independence in 1947, Calcutta was the premier industrial centre and largest port in India. Following independence and the loss of the hinterland that had provided raw materials and workers to its prominent manufacturing industries, Calcutta’s relative importance as an industrial base declined.The population of Calcutta Metropolitan District (CMD) was calculated to be more than 10 million in 1981; that of the Calcutta Metropolitan Corporation (CMC0 area was 3.3 million. At that time, the total urban population of India was approximately 160 million, thus some 6% of urban dwellers in India were resident of CMC.

The CMD is the slowest growing metropolis in India, yet it continues to add over 2,00,000 persons to its population in spite of continuing deficiencies in environment. About 7.8 million people live on the east bank of Hooghly river. This includes the 3.3 million people living in the CMC administrative area. The west bank population is about 2.2 million and is concentrated mainly in the Howrah Municipal Corporation (HMC) and Bally municipality opposite the CMC.

Despite its poverty and breakdown of civic amenities, people are increasingly flocking this metropolis. This has turned Calcutta as the most populous of the sub continent. The city has now attained super metropolitan character. More than one third of its population of about 10.2 million is now packed within a highly congested core area of about 104 sq.km. while the west of the population spreads over the CMD area of 1321 sq.km. From its primary function as a port, the city has now acquired multifunctional status covering a variety of functions.

For the first time mention has been made of Calcutta conurbation in the 1951 census of West Bengal, when the census superintendent, in his pioneering zeal delineated the Calcutta industrial region on the Hooghly side in recognition of a certain demographic, economic, industrial geographical unity – a fact surmised and hinted at since 19212, but not avowedly expressed by any government agency.

The total area covered by the conurbation is above 400 sq.km. of which the core cities of Calcutta and Howrah occupy around 100 sq. km. and 30 sq.km. of area respectively.

The Calcutta industrial conurbation has expanded tremendously in spatial, demographic and socio-economic dimensions. This has been achieved by a process of (a) accretion of periurban settlement, industrial and residential suburbs gaining urban status due to rapid change in proportion of non-agricultural workers; (b) municipal annexation of urbanized tracts, settled areas etc. lying adjacent to existing urban modes; (c) constant expansion of transport networks, especially of bus services from the central city and industrial towns into the peripheral areas, bringing large volume of commuters and (d) rapid growth of population and steady rise in density both in urban tracts and adjacent areas due to heavy influx of migrants, industrial labourers and displaced persons from beyond borders of West Bengal the Calcutta Metropolitan District (CMD) has an area of about 1040 sq.km. along the Hooghly encompassing two corporations, 33 municipalities and 42 non municipal urban units extending from Barupur –Budge in the south to Bansbari-Kalyani inn the north in addition to 475 densely settled and semi urbanized outlying rural communities around the urbanized zone. This area is little more than one per cent of total area of the state and contains 17 percent of total population and 75 per cent f urban population of the state.

The region, though endowed with rich alluvial soil, abundant basic raw materials, numerous perennial streams and a sea face which together could attract large number of people is now confronted with certain acute problems, both physical and socio-economic, Calcutta, a typical example o chance-erected and chance – directed city has grown haphazardly not only in its physical plan but also in terms of the provision of economic opportunities commensurate with the needs of a metropolis of its size. The city is plagued with overcrowding, degradation of housing, health hazards, primitive water supply, lack of space for new industries, traffic bottlenecks, power shortages and other problems. The lanes and streets are too narrow to cope with the traffic as only 8 per cent of total area is in transport use as against 30 percent as per modern standard.

However, Calcutta as a dynamic metropolis has the essential vitality t meet the challenge of the situation. Various efforts are being made to relieve the metropolis of its ills.

The problems of Calcutta and the Hooghly side call for the development of not only the different sub regions of the Lower Ganga Plain but also need rather more immediately the planned and integrated development of several counter-magnets in its vast hinterland as well as to arrest the Calcutta-ward flow of people and opportunities.

The remodeling of the existing transport links and laying down of the new ones will facilitate the movement of bulky goods like jute, tea, coal and other minerals along with the fish. The reviving of water transport may release the extra burden on railways and roads. The swampy chunks in the south east and south west Rarh lack adequate road and railway facilities. The laying down of additional lines will help improving the conditions and in developing agro-industries there. The seasonal roads in Duar hamper the movement of tea. The modernization and through connection will maintain regular flow of tea. Being a perishable item, tea requires quick transit and adequate warehousing.

I am Rashid Aziz Faridi ,Writer, Teacher and a Voracious Reader.
View all posts by Rashid Faridi →
This entry was posted in Cities, India. Bookmark the permalink.