A pilot aquaponics experiment is now underway in the Cook Islands that has the potential to become the South Pacific region’s best chance for preventing food shortages.

Aquaponics  is a sustainable food production system that combines a traditional aquaculture (raising aquatic animals such as snails, fish, crayfish or prawns in tanks) with hydroponics (cultivating plants in water) in a symbiotic environment. In aquaculture, effluents accumulate in the water, increasing toxicity for the fish. This water is led to a hydroponic system where the by-products from the aquaculture are filtered out by the plants as vital nutrients, after which the cleansed water is recirculated back to the animals. The term aquaponics is a portmanteau of the terms aquaculture and hydroponic. 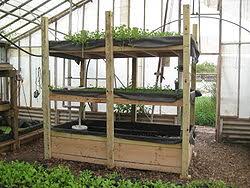 The project’s long-term objective is to give Pacific islanders — who are facing climate-related issues such as drought and fish poisoning — a way to sustainably grow crops using minimal water and no pesticides.