Rock Garden: A One Man Marvel of Ingenuity and Passion

A Wall Made by electrical Waste

Chandigarh rock garden is an epitome of creativity , innovation,ingenuity. It is a

Figures Made by Waste. Notice One hand is Made by a Clay Kettle.

unique garden that consists of various art objects. But the best part about the rock garden is that each of its artwork has been made by using industrial & urban waste. It is located in Sector 1 between the Capitol Complex and Sukhna Lake. The credit for laying its foundation goes to Nek Chand, who was the then Road Inspector in the Engineering Department of Chandigarh Capital Project.
Rock garden has been established in the form of an open-air exhibition hall. The garden houses sculptures made by using a variety of different discarded waste materials like frames, mudguards, forks, handle bars, metal wires, play marbles, porcelain, auto parts, broken bangles etc. Rock garden in Chandigarh, India is a unique creation and connoisseurs come from different parts of the world to see this amazing garden.

In his spare time, Chand began collecting materials from demolition sites around 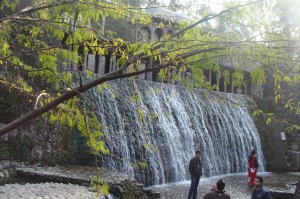 A Waterfall at Rock garden

the city. He recycled these materials into his own vision of the divine kingdom of Sukrani, choosing a gorge in a forest near Sukhna Lake . The gorge had been designated as a land conservancy, a forest buffer established in 1902 that nothing could be built on. Chand’s work was illegal, but he was able to hide it for eighteen years before it was discovered by the authorities in 1975. By this time, it had grown into a 12-acre (49,000 m2) complex of interlinked courtyards, each filled with hundreds of pottery-covered concrete sculptures of dancers, musicians, and animals. 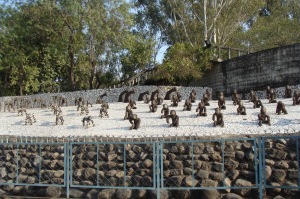 Monkeys and Other Animals

His work was in serious danger of being demolished, but he was able to get public opinion on his side, and in 1976 the park was inaugurated as a public space. Nek Chand was given a salary, a title (“Sub-Divisional Engineer, Rock Garden”), and a workforce of 50 laborers so that he could concentrate full-time on his work. It even appeared on an Indian stamp in 1983. The Rock Garden is still made out of recycled materials; and with the government’s help, Chand was able to set up collection centers around the city for waste, especially rags and broken ceramics. 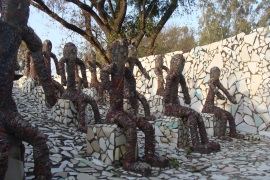 Figures Made by Broken Bangles

When Chand left the country on a lecture tour in 1996, the city withdrew its funding, and vandals attacked the park. The Rock Garden Society took over the administration and upkeep of this unique visionary environment. The garden is visited by over five thousand people daily, with a total of more than twelve million visitors since its inception.

We have recently gone to chandigarh for  a conference at Punjab university . There we visited this magnificent garden among other places  and clicked some picture. All the pictures in this post are those.Enjoy.

A Note of  Caution : Rock garden Can be Hired 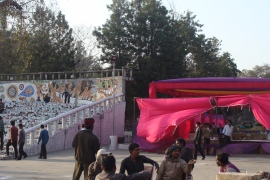 We noticed some pandals being

Food Being Prepared in Rock Garden.

errected  and at some distance food was being prepared.It seemed that it was meant for marriage. On enquiring the people there told that one can hire Rock garden for  marriages for rent. I think this can be detrimental to the environment   and to this precious monument.

And A Poll for Readers

I am Rashid Aziz Faridi ,Writer, Teacher and a Voracious Reader.
View all posts by Rashid Faridi →
This entry was posted in Travel, Urban Studies and tagged sukhna lake, transportation, travel. Bookmark the permalink.

1 Response to Rock Garden: A One Man Marvel of Ingenuity and Passion