A One-Way, One-Person Mission to Mars 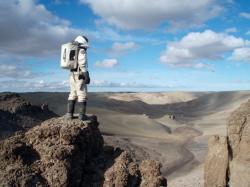 Will humans ever really go to Mars? Let’s face it, the obstacles are quite daunting. Not only are there numerous, difficult, technical issues to overcome, but the political will and perseverance of any one nation to undertake such an arduous task just can’t be counted on. However, one former NASA engineer believes a human mission to Mars is quite doable, and such an event would unify the world as never before. But Jim McLane’s proposal includes a couple of major caveats: the trip to Mars should be one-way, and have a crew of only one person.McLane worked at NASA for 21 years before leaving in 2007 to work for a private engineering firm. Being able to look from afar at NASA’s activities has given him a new perspective, he says.But McLane was still at NASA when he originally had an idea for a one-way, one-person mission to Mars. He calls his proposal the “Spirit of the Lone Eagle,” in deference to Charles Lindbergh’s solo flight from New York to Paris in 1927.

McLane’s idea came from his acquaintance with a Russian cosmonaut. “I noticed the cosmonaut seemed to be a slightly different type of person than the American astronaut,” McLane said. “Cosmonauts are primarily pilots, and like test pilots, they are very focused on getting the job done. The current American astronauts are picked for things such as their speaking ability and social skills, and most of them have advanced degrees. But the cosmonaut struck me as an adventurous, get-things-done-type person, like our original astronauts back in the 1960’s.”

A return to the “get it done” attitude of the 1960’s and a goal of a manned landing within a short time frame, like Apollo, is the only way we’ll get to Mars, McLane believes. Additionally, a no-return, solo mission solves many of the problems currently facing a round-trip, multiple person crew.

“When we eliminate the need to launch off Mars, we remove the mission’s most daunting obstacle,” said McLane. And because of a small crew size, the spacecraft could be smaller and the need for consumables and supplies would be decreased, making the mission cheaper and less complicated.

While some might classify this as a suicide mission, McLane feels the concept is completely logical.

“There would be tremendous risk, yes,” said McLane, “but I don’t think that’s guaranteed any more than you would say climbing a mountain alone is a suicide mission. People do dangerous things all the time, and this would be something really unique, to go to Mars. I don’t think there would be any shortage of people willing to volunteer for the mission. Lindbergh was someone who was willing to risk everything because it was worth it. I don’t think it will be hard to find another Lindbergh to go to Mars. That will be the easiest part of this whole program.” – universetoday

I’ve heard the theory that one or more unnamed astronauts landed on the moon during the Apollo missions and never came back.  The idea is that the astronauts we know were part of an Earth-based simulation at the same time and the capsules we saw land in the ocean were dropped from a jet. This was supposedly done because the radiation in space makes the mission deadly. We haven’t had any manned missions beyond Low Earth Orbit (100 to 1200 miles high) since Apollo, right? I think the ISS is about 240 miles high.