Chauncy D. Harris remedied the deficiencies of the former subjective and judgement-based classifications. In his paper ‘A Functional Classification of Cities in the United States (1943)’, he was able to identify quantitatively dominant function out of multifunctional  character of cities. He devised a scale of reference from his study of 984 towns (population more than 10,000) in United States based on the data provided by 1930 Census. He used two sets of information

reduced to percentages to indicate cut-off points for urban activities varying in importance.

Harris based his classification on the activity of greatest importance in each city, recognizing that all cities are more or less multifunctional, he attempted to set up quantitative definitions that would enable him to assign each city to one class or category.
He identified nine principal categories of towns –

Here is the table Harris used for classification. 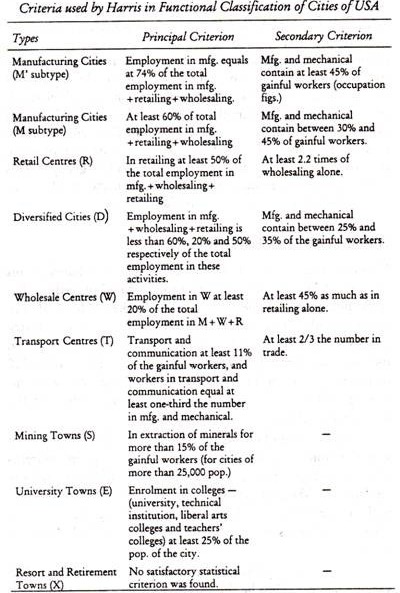 Harris’s classification suffers with some defects and is not universally viable. He used metropolitan districts as functional units because the industry-group data such as those
published now were not available during that time. Consequently, number of cities which were too small to have metropolitan districts were left unclassified.
Carter (1975) labelled Harris’s classification as subjective because the decisions to
access or delete with a minimum number or cut-off points seem to be a personal one and
were set by simple empirical means. Under the class of ‘Transport and Communications’,
workers engaged in telephone and telegraph services were omitted, which was nothing more than a subjective decision.

1 Response to Classification of Cities by Chauncy D. Harris