People not  really pay good  attention to crosswalks, even if they  prevent us from dying.

If they would have looked different – more colourful and vibrant – rather than the boring strip of lines that they are, it is possible people may pay more attention.

Artist Christo Guelov reimagines crosswalks in Madrid by turning them into art. Using the empty spaces between the white lines, he paints in striking geometric shapes and patterns, making the ground more noticeable and aesthetically-pleasing.

Why they cannot be in India and other country? in fact India experimented with 3d crosswalks. Developed by two mother-and-daughter artists from Gujarat, India, and painted on a highway in Ahmedabad, the crosswalk looks like a roadblock when seen from the distance.

Chinese authorities have also taken advantage of similar optical illusions to create 3D crosswalks . Instead of creating virtual roadblocks like in India, Chinese artists came up with “floating” 3D crossings, which appear to be levitating above the street when seen from a distance. 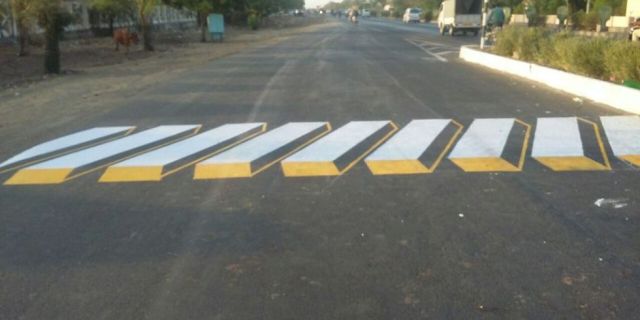 I am Rashid Aziz Faridi ,Writer, Teacher and a Voracious Reader.
View all posts by Rashid Faridi →
This entry was posted in earth, Glimpses of Our Cities, Innovations. Bookmark the permalink.