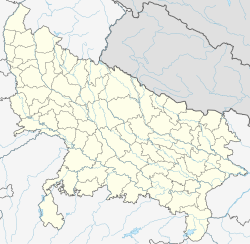 Faizabad,  was called Fyzabad in the British period. The city was the first capital of Awadh.it is situated on the banks of river Ghaghra. River Ghaghra is also known as  Saryu River.It was also called Karnali. Faizabad was the first capital of Awadh. The earliest reference found to Faizabad is said to be in the Ramayana, in which the city is named  as Saket. Saket means Heaven in Sanskrit. It was the ancient name of the holy city of Ayodhya. More accurately, reference is also found in Medieval and Modern writings when Nawab Saadat Ali Khan, Burhan-ul-Mulk was given the charge of the Subah of Awadh around 1722 by the Mughal Emperor. Nawab Sa’adat Khanfounded the first settlements along the banks of Ghaghra with a cantonment consisting of a fortress and mud barracks. Due to these temporary dwellings, Faizabad was first known as ‘Bangla’. The implied meaning of Bangla being hutment.

Establishment of Princely state of Avadh

Avadh, a princely state of India, was established around 1722 AD with Faizabad as its capital and Saadat Ali Khan as first Nawab.He made his palace near Ayodhya, and renamed the city of Saket to Faizabad, which became the capital of the new government

The city was developed later on by Saadat Ali Khan’s second successor, Nawab Shuja-ud-Daula into a full fledged capital city, with gardens, palaces, markets, roads and other infrastructure. Under Shuja-ud-Daula’s reign Faizabad achieved its culmination as an important centre of trade and commerce in northern India and attracted travellers, writers, merchants, artists and courtesans from all over Europe and Asia. Shuja-ud-Daula also built a fortress on the banks of Saryu after he lost the battle of Buxar in 1764. however, this fort now is nothing more than a hummock, just an edict remains which is pictured here.

Faizabad was also a centre of one of many battles of the Mutiny of 1857. A detailed history of Faizabad can be read in ‘Tareekh-e-Farahbaksh’, written by Munshi Mohd. Faiz Baksh, (after whom Faizabad is named) a courtier in the Shuja-ud-Daula’s court. This book has been translated into English by Hamid Afaq Qureshi as ‘Memoirs of Faizabad’. Faizabad also finds a prominent and detailed mention in ‘Guzishta Lakhnau’ written by Maulvi Abdul Halim ‘Sharar’. The third nawab of Awadh, Nawab Asaf-ud-Daula, shifted the Capital of Avadh to Lucknow in 1775 after his terms with his mother became sour.

Saadat Khan, the first Nawab of Awadh, laid the foundation of Faizabad at the outskirt of ancient city of Ayodhya. Faizabad developed as a township during the reign of Safdar Jang, the second nawab of Avadh (1739–54), who made it his military headquarters while his successor Shuja-ud-daula made it full fledged capital city. Suja-ud-daula, the third Nawab of Awadh, settled at Faizabad after 1764 and built a fort known as Chhota Calcutta, now in ruins. In 1765 he built the Chowk and Tirpaulia and subsequently laid out the Anguribagh and Motibagh to the south of it, Asafbagh and Bulandbagh to the west of the city. During the reign of Shuja-Ud-Daula, Faizabad attained such a prosperity which it never saw again. The Nawabs graced Faziabad with several beautiful buildings, notable among them being the Gulab Bari, Moti Mahal and the tomb of Bahu Begum. Gulab Bari is a striking building of fine properties, standing in a garden surrounded by a wall, approachable through two large gateways. These buildings are particularly interesting for their assimilative architectural styles. Shuja-ud-daula’s wife was the well known Bahu Begum, who married the Nawab in 1743 and continued to reside in Faizabad, her residence being the Moti-Mahal. Close by at Jawaharbagh lies her Maqbara, where she was buried after her death in 1816. It is considered to be one of the finest buildings of its kind in Avadh, which was built at the cost of three lakh rupees by her chief advisor Darab Ali Khan. A fine view of the city is obtainable from top of the begum’s tomb. Bahu Begum was a woman of great distinction and rank, bearing dignity. Most of the Muslim buildings of Faizabad are attributed to her. From the date of Bahu Begum’s death in 1815 till the annexation of Avadh, the city of Faizabad gradually fell into decay. The glory of Faizabad finally eclipsed with the shifting of capital from Faizabad to Lucknow by Nawab Asaf-ud-daula.

I am Rashid Aziz Faridi ,Writer, Teacher and a Voracious Reader.
View all posts by Rashid Faridi →
This entry was posted in Cities, culture, Glimpses of Our Cities, India, Urban Studies. Bookmark the permalink.