And Now Water has Changed its Behaviour !!! 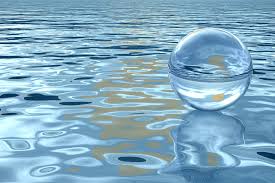 A water molecule contains one oxygen and two hydrogen atoms connected by covalent bonds. Water is a liquid at standard ambient temperature and pressure, but it often co-exists on Earth with its solid state, ice, and gaseous state (water vapor or steam). Water also exists in a liquid crystal state near hydrophilic surfaces.

Water covers 71% of the Earth’s surface,and is vital for all known forms of life.On Earth, 96.5% of the planet’s water is found in oceans, 1.7% in groundwater, 1.7% in glaciers and the ice caps of Antarctica and Greenland, a small fraction in other large water bodies, and 0.001% in the air as vapor, clouds (formed of solid and liquid water particles suspended in air), and precipitation. Only 2.5% of the Earth’s water is freshwater, and 98.8% of that water is in ice and groundwater. Less than 0.3% of all freshwater is in rivers, lakes, and the atmosphere, and an even smaller amount of the Earth’s freshwater (0.003%) is contained within biological bodies and manufactured products.

Sciencedaily reports that using  new techniques, a research team led by Carnegie’s Malcolm Guthrie has made a  discovery about how ice behaves under pressure, changing ideas that date back almost 50 years. Their findings could alter our understanding of how the water molecule responds to conditions found deep within planets and could have deeper implications  for science.

This work is published in the Proceedings of the National Academy of Science.

When water freezes into ice, its molecules are bound together in a crystalline structure held together by hydrogen bonds.  Hydrogen bonds are highly versatile type of bond and, so, crystalline ice can make at least 16 different structures.

In all of these structural forms of ice, the simple H2O molecule is the universal building unit. In 1964 it was predicted that, under sufficient pressure, the hydrogen bonds could strengthen to the point where they might actually break the water molecule apart. The possibility of directly observing a disassociated water molecule in ice has proven a fascinating goal for scientists and has driven extensive research for the last 50 years.

A new method is to “see” the hydrogen atoms-or protons-directly. This can be done by bouncing neutrons off the ice and then carefully measuring how they are scattered.The team used this method for its research.

The results of research indicate that dissociation of water molecules follows two different mechanisms. Some of the molecules begin to dissociate at much lower pressures and via a different path than was predicted in the classic 1964 paper.

Being able to ‘see’ hydrogen with neutrons isn’t just important for studies of ice. This can be a game-changing technical breakthrough. The applications could extend to systems that are critical to societal challenges, such as energy. For example, the technique can yield greater understanding of methane-containing clathrate hydrates and even hydrogen storage materials that could one day power automobiles.

I am Rashid Aziz Faridi ,Writer, Teacher and a Voracious Reader.
View all posts by Rashid Faridi →
This entry was posted in opinions, water. Bookmark the permalink.

1 Response to And Now Water has Changed its Behaviour !!!