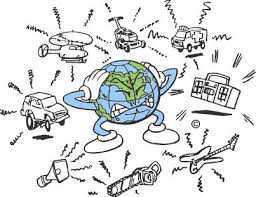 Environmental noise is a worldwide problem. However, the way the problem is dealt with differs greatly from country to country and is very much dependent on culture, economy and politics. But the problem persists even in areas where extensive resources have been used for regulating, assessing and damping noise sources or for creation of noise barriers. For example, huge efforts have been made to reduce traffic noise at source. In fact, today’s cars are much quieter than those manufactured ten years ago, but the traffic volume has increased so much that the effect of this effort has been wiped out and the annoyance level has increased. Manufacturing quieter cars might have eased the problem for a period but it certainly hasn’t removed it.

It is broadly divided into two parts: Industrial and Non-Industrial Noise.

As mechanical noise is the major part of industrial noise and is due to machinery of all kinds and often increases with the type of operation and power capacity of the machines . The characteristics of industrial noise vary considerably depending on specific industrial process. High noise levels common in petrochemical, steel industries, thermal power stations, cement industries, and mines etc., can be due to presence of unsteady force and it’s structural elements caused by moving parts, vibration of heavy equipments, sound from engines, gear, bearings, rotating and reciprocating machines, combustion, fans, pressurised flow, during shifting of raw materials and end products, trucks and dumpers etc.

Road traffic is the most widespread source of noise in all countries and the most prevalent cause of annoyance and interference. It is directly proportional to the volume of vehicles. Increasing of population is increasing of vehicles and hence increasing of Noise pollution. The major sources of noise in automobiles are exhaust, intake, engine and fan, and tires at high speed. The noise output of all components increases with speed. As an example, keeping all the conditions same, an approximately 10 dB (A) increase with speed of a car from 30mph to 60mph. The Road traffic noise not only depends on volume of vehicles and also depends on several factors, some of them are below:

The people living near roadside(highway) are mainly exposed.

Noise from the trains includes 1) diesel Exhaust 2) Engine and Air Intake 3) Cooling Fans 4) Wheel-rail interaction 5) Electric generator and electric traction motor 6) miscellaneous noise generated in freight and passenger cars etc. Other intermittent noises includes car impact sounds when trains are braking and accelerating and the sounds of sirens or horns that produces 10 to 20 dB (A) higher than from other sources. The noise generated in communities having long haul or rapid transit vehicles (like Metros) in their environment will depend primarily on track observer distance, frequency and train length and condition of track. The rapid transit trains are short, so that their noise duration time is much less than that of goods trains. Rapid transit vehicles produce lower level of noise than compare to lengthy trains.

Noise from commercial aircraft is only a problem around airports as this is where aircraft converge at low altitude and high engine power. Increasing air traffic with different types of aircraft’s and city expansion will exacerbate the noise problems. Noise pollution of an aircraft will increase with the speed. The aircraft noise reduction; traffic and flight path restrictions can alleviate them.

The invention of supersonic aircrafts has added more noise for the plight of persons who live near aerodromes. Taking off and landing of an aircraft produces unbearable noise.

It has been observed that supersonic jet planes are one of the biggest irritants in today’s noisy world. The noise of these planes may sometimes break windowpanes, crack on walls and shakes the buildings also. By these effects of noise one can very easily understand that what would be the effects of such noise on human body.

Community noise is one of the major sources for affecting a large number of people living within the community. It occurs due to various activities of community during religious festivals, fairs, marriages, or public functions. The use of amplifiers provides one of most frequent sources of disturbances. Loudspeaker systems are in almost continual use at many open-air events.

Loudspeakers and amplified music are violently used in unrestricted way at restaurants, marriage functions, and clubs, religious and festive gatherings and even in sale of lottery tickets. There is also the perennial problem of the use of portable radios and cassette players on beaches or in places where either people have gone in search of peace and quiet. Most of the problems, which occur in public, originate from these main sources: Amplified sound i.e. loud speakers, public gatherings and festivals; Indecency behaviour of people; Rash driving with various kinds of horns / music with unnecessary use in vehicles.

Our hearing is less sensitive at very low and very high frequencies. In order to account for this, weighting filters can be applied when measuring sound. The most common frequency weighting in current use is “A-weighting” providing results often denoted as dB (A), which conforms approximately to the response of the human ear. A “C-weighting” is also used, particularly when evaluating very loud or very low frequency sounds.

At home and at work, we often hear noise from ventilation or heating systems that is hardly noticeable because it has no prominent features. The noise never stops and has no tone, but if the fan suddenly stops or starts to rotating, the change may disturb or even annoy us. Our hearing recognises information in the sounds that we hear. Information we don’t need or want is noise. Noise features that make us listen and take notice are tones or changes in sound level. The more prominent the tone, and the more abrupt the change in sound level, the more noticeable the noise. Ambient noise is the noise from all sources combined — factory noise, traffic noise, birdsong, running water, etc.

Selection of equipment and the duration of noise monitoring is based on the type of ambient noise.

Continuous noise is produced by machinery that operates without interruption in the same mode, for example, blowers, pumps and processing equipment. Measuring for just a few minutes with hand-held equipment is sufficient to determine the noise level.

When machinery operates in cycles, or when single vehicle or aeroplane pass by, the noise level increases and decreases rapidly. A single passing vehicle or aircraft is called an event.

The noise from impacts or explosions, e.g., punch press or gunshot, is called impulsive noise.

Annoying tones are created in two ways: Machinery with rotating parts such as motors, gearboxes, fans and pumps often create tones. Unbalance or repeated impacts cause vibration that, transmitted through surfaces into the air, can be heard as tones. Pulsating flows of liquids or gases can also create tones, caused by combustion processes or flow restrictions.

Low frequency noise has significant acoustic energy in the frequency range 8 to 100 Hz. Noise of this kind is typical for large diesel engines in trains, ships, and power plants and, since the noise is hard to muffle and spreads easily in all directions, it can be heard for miles.

A direct application of linear scales (in Pa) to the measurement of sound pressure leads to large and unwieldy numbers. And, as the ear responds logarithmically rather than linearly to stimuli, it is more practical to express acoustic parameters as a logarithmic ratio of the measured value to a reference value. This logarithmic ratio is called a decibel or dB (A). The advantage of using dB (A) can be clearly seen in the illustration in the picture on the next page. Here, the linear scale with its large numbers is converted into a manageable scale from 0 dB (A) at the threshold of hearing (20 µPa) to 130 dB (A) at the threshold of pain (100 Pa).

I am Rashid Aziz Faridi ,Writer, Teacher and a Voracious Reader.
View all posts by Rashid Faridi →
This entry was posted in pollution. Bookmark the permalink.