Gravitational biology
Gravitational biology is the study of the effects gravity has on living organisms. Throughout the history of the Earth life has evolved to survive changing conditions, such as changes in the climate and habitat. The only constant factor in evolution since life first began on Earth is the force of gravity. As a consequence, all biological processes are accustomed to the ever-present force of gravity and even small variations in this force can have significant impact on the health and function of organisms.

Gravity and life on Earth

The force of gravity on the surface of the Earth, normally denoted g, has remained constant in both direction and magnitude since the formation of the planet.As a result, both plant and animal life have evolved to rely upon and cope with it in various ways. 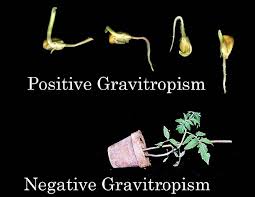 Every day the realization of space habitation becomes closer, and even today space stations exist and are home to long-term, though not yet permanent, residents. Because of this there is a growing scientific interest in how changes in the gravitational field influence different aspects of the physiology of living organisms, especially mammals since these results can normally be closely related to the expected effects on humans. All current research in this field can be classified into two groups.

The second group consist of those involving gravitational fields of more than one g, termed hypergravity. For brief periods during take-off and landing of space craft astronauts are under the influence of hypergravity. Understanding the effects of hypergravity are also necessary if colonization of planets larger than the Earth is ever to take place.
Recent experiments
Recent experiments have proven that alterations in metabolism, immune cell function, cell division, and cell attachment all occur in the hypogravity of space. For example, after a matter of days in microgravity (< 10-3 g), human immune cells were unable to differentiate into mature cells. One of the large implications of this is that if certain cells cannot differentiate in space, organisms may not be able to reproduce successfully after exposure to zero gravity.

Stress associated with space flight is responsible for the inability of some cells to differentiate. These stresses can alter metabolic activities and can disturb the chemical processes in living organisms. A specific example would be that of bone cell growth. Microgravity impedes the development of bone cells. Bone cells must attach themselves to something shortly after development and will die if they cannot. Without the downward pull of a gravitational force on these bone cells, they float around randomly and eventually die off. This suggests that the direction of gravity may give the cells clues as to where to attach themselves.

On Earth plant roots exhibit characteristic behaviors called waving and skewing, which were thought to be gravity-dependent events. This is how the roots develop and grow in terms of direction and changes in direction. However, Arabidopsis plants grown on the International Space Station (ISS) have proved this theory wrong, according to a study published in BioMed Central’s open access journal BMC Plant Biology: root waving and skewing occur in spaceflight plants independently of gravity.

To test what happens to plant root growth when you remove gravity entirely, a research team from the University of Florida, Gainesville, USA, grew two types of Arabidopsis thaliana cultivars – Wassilewskija (WS) and Columbia (Col-0) — on the ISS.

The plants were grown in specialized growth units that combined a plant habitat with a camera system which captured images every six hours. Imaging hardware delivered the telemetric data in real-time from the ISS, and comparable ground controls were grown at the Kennedy Space Center.

It was found that, in the absence of gravity, but in the presence of directional light, spaceflight roots remained strongly negatively phototropic and grew in the opposite direction of the shoot growth, as they do back on Earth.

Experimenters Anna-Lisa Paul and Robert Ferl commented “Although plants use gravity as an orientating tropism on the Earth’s surface, it is clear that gravity is neither essential for root orientation, nor is it the only factor influencing the patterns of root growth. It seems that other features of the environment are also required to ensure that a root grows away from the seed, thereby enhancing its chances of finding sufficient water and nutrients to ensure its survival.”