Historic Handshake Between Man and Machine 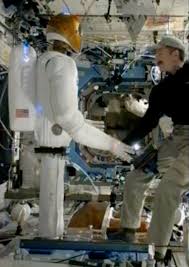 A NASA robot built to ease the daily lives of astronaut in space greeted its human commander with a hearty handshake Wednesday (Feb. 15,2012), along with a silent message: “Hello, World.”

The historic handshake between man and machine —a first in space —was shared between NASA’s humanoid robot, named Robonaut 2, and American astronaut Daniel Burbank on the International Space Station.Robonaut 2 is a $2.5 million droid designed to be an  assistant to help astronauts with complex chores to keep the space station running properly. The robot was developed through a NASA partnership with car manufacturer General Motors and is the first humanoid robot ever to fly in space.

According to Wikipedia, A ‘humanoid  is something that has an appearance resembling a human being. The term first appeared in 1912 to refer to fossils which were morphologically similar to, but not identical with, those of the human skeleton. Although this usage was common in the sciences for much of the 20th century, it is now considered rare.More generally, the term can refer to anything with uniquely human characteristics and/or adaptations, such as possessing opposable appendage (thumbs) or the ability to walk in an upright position.

Read it at Livescience