Jaunpur is also known as Sheeraz-e-Hind. The  city was founded by the Sultan of Delhi Feroz Shah Tughlaq and named in memory of his cousin, Muhammad bin Tughluq, whose given name was Jauna Khan.In 1388, Feroz Shah Tughlaq appointed Malik Sarwar as the governor of the region. The Sultanate was in disarray because of factional fighting for power, and in 1393 Malik Sarwar declared independence. He and his adopted son Mubarak Shah founded what came to be known as the Sharqi dynasty (dynasty of the East). During the Sharqi period the Jaunpur Sultanate was a strong military power in Northern India, and on several occasions threatened the Delhi Sultanate. 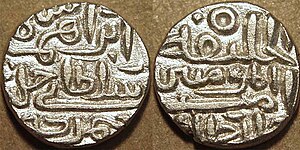 Silver coin of 32 rattis issued by Ibrahim Shah of Jaunpur.

The Jaunpur Sultanate attained its greatest height under the younger brother of Mubarak Shah, who ruled as Shams-ud-din Ibrahim Shah (ruled 1402-1440). To the east, his kingdom extended to Bihar, and to the west, to Kanauj; he even marched on Delhi at one point. Under the aegis of a Muslim holy man named Qutb al-Alam, he threatened the Sultanate of Bengal under Raja Ganesha.

During the reign of Husain Shah (1456–76), the Jaunpur army was perhaps the biggest in India, and Husain decided to attempt a conquest of Delhi. However, he was defeated on three successive attempts by Bahlul Khan Lodi. It is a dominant trend in modern historiography of the period that this defeat was a cause of a large number of eunuchs in the military ranks. Finally, under Sikandar Lodi, the Delhi Sultante was able to reconquer Jaunpur in 1493, bringing that sultanate to an end.

The Jaunpur Sultanate was a major center of Urdu and Sufi knowledge and culture. The Sharqi dynasty was known for its excellent communal relations between Muslims and Hindus, perhaps stemming from the fact that the Sharqis themselves were originally indigenous converts to Islam, as opposed to descendants of Persians or Afghans. Jaunpur’s independence came to an end in 1480, when the city was conquered by Sikander Lodhi, the Sultan of Delhi. The Sharqi kings attempted for several years to retake the city, but ultimately failed.

Although many of the Sharqi monuments were destroyed when the Lodis took the city, several important mosques remain, most notably the Atala Masjid, Jama Masjid(now known as the Bari (big mosque) Masjid) and the Lal Darwaza Masjid. The Jaunpur mosques display a unique architectural style, combining traditional Hindu and Muslim motifs with purely original elements. The old bridge over the Gomti Riverin Jaunpur dates from 1564, the era of the Mughal Emperor Akbar. The Jaunpur Qila, a fortress from the Tughlaq era, also remains in good form.

Jaunpur district was annexed into British India based on the Permanent settlement of 1779, and thus was subject to the Zamindari system of land revenue collection. During the Revolt of 1857 the Sikh troops in Jaunpur joined the Indian rebels. The district was eventually reconquered for the British by Gurkha troops from Nepal. Jaunpur then became a district administrative center.

The king of Benares got his daughter married to the king of Ayodhya, Devakumar and gave away some part of his dominion as dowry in which the Raghuvanshis of Dobhi area settled themselves. Right after this occurred the arrival of Vatyagotri, Durgvanshi and Vyas Kshattriyas in this district. In this district the Bharas and Soiriyas held away. The Kshattriyas began to have conflicts with them. The Gaharwar Kshattriyas completely finished the domination of Bharas and Soiriyas. In the eleventh century the Gaharwar rajputs of Kannauj started making Jafrabad and Yaunapur (Jaunpur) rich and powerful. Vijaychand came here from Kannauj and got several mansions and forts built. Even today, the ruins of the fort south of Jafrabad can be seen. In 1194 A.D., Qutubuddin Aibak attacked Mandev or Mandeya (present day Jafrabad). After defeating the then king Udaypal, he entrusted power to Dewanjeet Singh and headed towards Banares. In 1389 A.D., Mahmood Shah, the son of Feroze Shah ascended the throne. He made Sarbar Khwaja a minister and, later in 1393 A.D. gave him the little of Malik-ul-Sharq and entrusted him with the area from Kannauj to Bihar. Malik-ul-sharq made Jaunpur his capital and established his reign from Etawah to Bengal and Vindhyachal to Nepal. The founder of the Sharqi Dynasty, Malik-ul-sharq, died in 1398 A.D. Whereupon, his foster son Saayed Murakshah ascended the throne of Jaunpur. His younger brother Ibrahimshah succeeded him to the thorne. Ibrahimshah proved to be an accomplished and able ruler. He implemented the policy of good will with the Hindus. During the Sharqi period, many grand buildings, mosques and mausoleums were built. Ferozeshah had lain the foundations of the Atala Mosque in 1393 A.D. but it was completed by Ibrahim shah in 1408 A.D. Ibrahimshah got started the construction of Jama Masjid and Bari Masjid which were completed by Husainshah. The unique aspect of Hindu-Muslim communal harmony which had been present during the Sharqi Parishad in Jaunpur district- which has held an important position in the fields of Education, Culture, Music, Arts and Literature- its fragrance exists even today. The Lodhy Dynasty held the reins of power on the throne of Jaunpur from 1484 A.D. to 1525 A.D. In 1526 A.D. Babar attached Delhi and defeated and killed Ibrahim Lodhi in the battle of Panipat. To conquer Jaunpur, Babar sent his son Humayun, who defeated the ruler of Jaunpur. Upon the death of Humayun in 1556 A.D. his 18 years old son Jalaluddin Akbar ascended to throne. In 1567 A.D. when Ali Kuli Khan rebelled, then Akbar himself attacked and Ali Kuli Khan was killed in the battle. Akbar stayed for several days at Jaunpur. Thereafter, he went back after appointing Sardar Muneem Khan as the ruler. It was during the reign of Akbar that the Shahi Pul (Jaunpur) was built. After the Puranic period, scholars link Jaunpur with the reign of Chandragupta Vikramadigtya upto Manyeech and the fact that this place had been influenced by Buddhist thoughts also. The Bhars and Koiree Gujjar, Pratiharas and Gaharwars too have held power here. After the displacement of Mahmmad Gajnabi from here (11th cent.) the victory of Gauri and the Mohammad Gauri Gyanchand conflict and the subsequent transfer of the royal treasure to Arabi; the appointment in Jaunpur of Zafar Khan Tughlaq by his father Gayasuddin Tughlaq- all lead to the building of the present day city. In 1722 A.D. after being a part of the Mughal Sultanat for a century and a half, Jaunpur was entrusted to the Nawab of Awadh. Later in 1775 A.D. Jaunpur too, along with Benares went into the hands of the English from the king of Benares, Mansaram. From 1775 to 1788 A.D. Jaunpur was under the dominion of Benares and then it was in the hands of the Regiment Dekana. For the first time in 1818 A.D. the Deputy Collectorateship was established and later it became a separate district. In 1820 A.D., Azamgarh district was also brought under Jaunpur but some part of Azamgar in 1822 and the whole of Azamgarh in 1830 A.D. was separated from Jaunpur.

Gomti, Sai, Varuna, Pili, and Basuhi are the five rivers which make its land fertile.

I am Rashid Aziz Faridi ,Writer, Teacher and a Voracious Reader.
View all posts by Rashid Faridi →
This entry was posted in Cities, Glimpses of Our Cities, India, Uncategorized. Bookmark the permalink.