John Loudon McAdam (21 September 1756 – 26 November 1836) was  Scottish and road-builder. He invented a new process, “macadamisation”, for building roads with a smooth hard surface that would be more durable and less muddy than soil-based tracks.

Modern road construction still reflects McAdam’s influence. Of subsequent improvements, the most significant was the introduction of tar (originally coal tar) to bind the road surface’s stones together – “tarmac” (for Tar Macadam) – followed later by the use of hot-laid tarred aggregate or tar-sprayed chippings to create better road metalling. Though, in the medieval Islamic world, many roads were built throughout the Arab Empire. The most sophisticated roads were those of Baghdad, Iraq, which were paved with tar in the 8th century. The genius of the man lies in the process. More recently, oil-based asphalt laid on reinforced concrete has become a major road surface, but its use of granite or limestone chippings still recalls McAdam’s innovation.

In two treatises written in 1816 and 1819 (Remarks on the Present System of Road-Making and Practical Essay on the Scientific Repair and Preservation of Roads) he argued that roads needed to be raised above the surrounding ground and constructed from layered rocks and gravel in a systematic manner.

He decided to remake the roads under his care with crushed stone bound with gravel on a firm base of large stones. A camber, making the road slightly convex, ensured rainwater rapidly drained off the road rather than penetrate and damage the road’s foundations. This construction method, the greatest advance in road construction since Roman times, became known as “macadamisation”, or, more simply, “macadam”.

The macadam method spread very quickly across the world. The first macadam road in North America, the National Road, was completed in the 1830s and most of the main roads in Europe were subject to the McAdam process by the end of the nineteenth century. 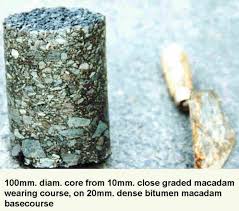 McAdam’s method was simpler than previous ones, yet more effective at protecting roadways: he discovered that massive foundations of rock upon rock were unnecessary, and asserted that native soil alone would support the road and traffic upon it, as long as it was covered by a road crust that would protect the soil underneath from water and wear.

Unlike Telford and other road builders of the time, McAdam laid his roads as level as possible. McAdam believed that the “proper method” of breaking stones for utility and rapidity was accomplished by people sitting down and using small hammers, breaking the stones so that none of them was larger than six ounces in weight. He also wrote that the quality of the road would depend on how carefully the stones were spread on the surface over a sizeable space, one shovelful at a time.

McAdam directed that no substance that would absorb water and affect the road by frost should be incorporated into the road. Neither was anything to be laid on the clean stone to bind the road. The action of the road traffic would cause the broken stone to combine with its own angles, merging into a level, solid surface that would withstand weather or traffic.

Through his road-building experience McAdam had learned that a layer of broken angular stones would act as a solid mass and would not require the large stone layer previously used to build roads. By keeping the surface stones smaller than the tyre width, a good running surface could be created for traffic. The small surface stones also provided low stress on the road, so long as it could be kept reasonably dry.

McAdam’s renown is due to his effective and economical construction, which was a great improvement over the methods used by his generation. He emphasized that roads could be constructed for any kind of traffic, and he helped to alleviate the resentment travelers felt toward increasing traffic on the roads. His legacy lies in his advocacy of effective road maintenance and management. He advocated a central road authority and the trained professional official, who could be paid a salary that would keep him from corruption. This professional could give his entire time to his duties and be held responsible for his actions.

Source(s): About The Man,  The Surface

I am Rashid Aziz Faridi ,Writer, Teacher and a Voracious Reader.
View all posts by Rashid Faridi →
This entry was posted in Roads andHighways. Bookmark the permalink.