Yamuna: Which Once Flowed in India and Why it cannot be Thames The Yamuna (Pron:ˈjʌmʊnə) (Sanskrit: यमुना), sometimes called Jamuna (Bengali: যমুনা, Hindi: जमुना, Urdu: جمنا) or Jumna, is the largest tributary river of the Ganges (Ganga) in northern India. Originating from the Yamunotri Glacier at a height of 6,387 metres on the south western slopes of Banderpooch peaks in the Lower Himalayas in Uttarakhand, it travels a total length of 1,376 kilometers (855 mi) and has a drainage system of 366,223 square kilometres (141,399 sq mi), 40.2% of the entire Ganges Basin, before merging with the Ganges at Triveni Sangam, Allahabad.

It crosses several states, Uttarakhand, Haryana and Uttar Pradesh, passing by Himachal Pradesh and later Delhi, and meets several of its tributaries on the way, including Tons, its largest and longest tributary in Uttarakhand, Chambal, which has its own large basin, followed by Sindh, the Betwa, and Ken. Most importantly it creates the highly fertile alluvial, Yamuna-Ganges Doab region between itself and the Ganges in the Indo-Gangetic plain. Nearly 57 million people depend on the Yamuna waters. With an annual flow of about 10,000 cubic billion metres (cbm) and usage of 4,400 cbm (of which irrigation constitutes 96 per cent), the river accounts for more than 70 per cent of Delhi’s water supplies. Just like the Ganges, the Yamuna too is highly venerated in Hinduism and worshipped as goddess Yamuna, throughout its course. In Hindu mythology, she is the daughter of Sun God, Surya, and sister of Yama, the God of Death, hence also known as Yami and according to popular legends, bathing in its sacred waters frees one from the torments of death.

The water of Yamuna is of “reasonably good quality” through its length from Yamunotri in the Himalayas to Wazirabad in Delhi, about 375 km, where the discharge of waste water through 15 drains between Wazirabad barrage and Okhla barrage renders the river severely polluted after Wazirabad in Delhi. One official describes the river as a “sewage drain” with biochemical oxygen demand (BOD) values ranging from 14 to 28 mg/l and high coliform content.

Why Calling Once Flowed

Before Wazirabad Barrage in Delhi the flow of Yamuna is monthsdiverted into western and eastern yamuna Canal. So the main course remains virtually ‘waterless’ for 8-9 months of the year.

There are three main sources of pollution in the river, namely households and municipal disposal sites, soil erosion resulting from deforestation occurring to make way for agriculture along with resulting chemical wash-off from fertilizers, herbicides, and pesticides and run-off from commercial activity and industrial sites.

India consumes about 86,311 tonnes of technical-grade insecticides annually to cover 182.5 million hectare of its land. Most Indian rivers pass through agricultural areas that use pesticides. This makes leaching from agricultural fields the most serious non-point — unspecified, and therefore, not measurable accurately — source of pollution to the aquatic environment. And now there’s a 1995 study that’s found traces of isomers (a carcinogenic organochlorine) in Indian rivers, including the Yamuna.

Why Yamuna Cannot be Thames

With increasing population of London River Thames got more and more populated.The process started with famous “Industrial Revolution”. So much so that once it was called “Place of Death”. There were many attempts to clean up but to no avail. Then came year 2000 and and it became boon for the Thames.In the new 2000 initiative people living along the river clean it up themselves at least a day in a year.Today population of London is around 1 crore and it is a thriving city but the pollution is around level zero.According to city planners,Thames is as clean as it was 150 years before. 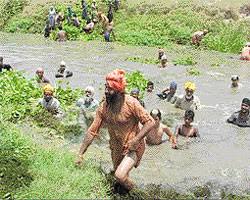 With their hands Sancherwal and others labour to restore the Kali Bein.

There are such examples in india also. Paondhoi river of Saharanpur is a telling example. Janbhagidari  programme cleaned it in only four months!!! Kali Bein river of Punjab is also an example. The zeal and dedication of Sant Balbir Singh Sinchewal has helped in reviving the Kali Bein, the river in which Guru Nanak, founder of Sikhism, is believed to have taken a holy dip and attained enlightenment five centuries ago. 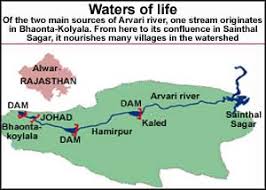 Arvari river of Rajasthan is also an example in community water management. In 1985 – 86, unusually low rainfall and excessive logging lead to the worst droughts in history in Rajasthan and the district of Alwar, one of the poorest districts in the state, was badly affected. The groundwater table had receded below the critical level and the state declared parts of the area ‘dark zones’, meaning that the situation was so severe as to warrant a restriction on any further extraction of groundwater.

A tribal elder suggested to Tarun Bharat Sangh, a local non-governmental organisation, that it could alleviate the situation by reviving traditional water harvesting systems to solve the water problems of the villages. He explained the rich tradition of building Johads in the region, which were created by simple inexpensive traditional technology. Johads are earthen check dams that catch and conserve rainwater, leading to improved percolation and groundwater recharge.

Beginning with Gopalpura village in 1985, Tarun Bharat Sangh played a leadership, catalytic role and acted as a facilitator in building 6000 Johads and rejuvenating 2500 old structures with the help of village communities in 1058 villages.

I am Rashid Aziz Faridi ,Writer, Teacher and a Voracious Reader.
View all posts by Rashid Faridi →
This entry was posted in Rivers. Bookmark the permalink.

2 Responses to Yamuna: Which Once Flowed in India and Why it cannot be Thames