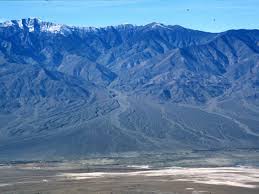 An alluvial fan is a fan-shaped or cone-shaped deposit of gravel, sand, and smaller materials. When water flows down a mountain, it picks up sand and other materials from the mountain. When the water reaches the base of the mountain and spreads out on to flat land, that material is deposited. As the material builds up over time, an alluvial fan is created.

The convergence, or blending, of several alluvial fans at the bottom of a mountain is called a bajada. Bajadas are common in dry climates, like the American Southwest. Bajadas can be narrow, from the flow of two or three streams of water, or they can be wide, combining dozens of alluvial fans.

Alluvial fans and bajadas can be found in deserts, where flash floods wash down material from nearby hills. They can also be found in wetter climates, where streams are more common.

Over time, water flowing down the Koshi River in Nepal has built up an alluvial fan over 150,000 square kilometers (almost 58,000 square miles) as it flows out of the Himalayan foothills. In 2008, heavy rainfall caused the river to overflow its banks and spread out onto the alluvial fan where people lived. Over a million people were left without a home because of the flooding.

Alluvial fans exist on other planets. The presence of alluvial fans on Mars gives evidence for the existence of liquid water on the planet billions of years ago.

I am Rashid Aziz Faridi ,Writer, Teacher and a Voracious Reader.
View all posts by Rashid Faridi →
This entry was posted in Landforms and tagged Environment, science. Bookmark the permalink.