There are 37 Indian cities among the world’s 300 fastest growing urban centres, according to a survey conducted by the City Mayors Foundation, an global think tank on urban affairs.

The economic boom has been a catalyst for the fast-track development across India. The nation’s development has now shifted from the big metropolitan cities to the smaller cities where the cost of living is much lower and the quality of life far better.

Also with small cities offering better infrastructure, better work-life balance and lucrative jobs, the boom is evident. Although there’s still some way to go for smaller Indian cities to be counted amongst India’s best, they have already caught up with (in some case even beaten), the bigger ones in terms of fast-paced development and urbanization.

A rapidly expanding and industrially booming city, Ghaziabad is home to some of the world’s best and biggest shopping malls and multiplexes.

The construction boom in Ghaziabad is nothing short of phenomenal.

The City Mayors Foundation has ranked these cities assuming annual growth rates for urban areas between the years 2006 and 2020. The study places special emphasis on growth/decline in the past and forecasts for the future made by international and national statistical organisations.Surat, India’s diamond city, is India’s second-fastest and the world’s fourth-fastest growing city.

The largest city in Haryana, Faridabad is the major industrial hub of the state. According to reports, the city accounts for half of the income tax collected in the state and about 60 per cent of Haryana’s revenue.

The city’s demographics make it ideal for the services sector boom that it is experiencing. The industrial sector too is growing rapidly in Nashik.

Patna, the capital of Bihar, is a major agricultural hub with its production of foodgrain, sugarcane, rice, etc making it one of the major exporting centres.Under the new government, headed by Chief Minister Nitish Kumar, the state has seen rapid growth and Patna, by far, has been one of the biggest benefactors of this thrust on development.In 2009, the World Bank ranked Patna as the second best city in India to start up a business. The city also has lowest slum population of any city in India.Patna is India’s 5th fastest growing city and the 21st fastest growing city in the world, according to the study.Patna’s average annual population growth rate: 3.72%

Rajkot, one of the largest cities in Gujarat, is the nation’s 6th fastest growing city. It has been ranked by City Mayors as the 22nd fastest growing urban area in the world.

The capital of Rajasthan, Jaipur is a major hub for traditional and modern industries. It has a booming gems and jewellery industry and is one of the largest exporters of gold, diamond and stone jewelery in Asia. It is also coming up as a major ITES centre, apart from handlooms, textiles, readymade garments, and carpets.

It has been ranked 31st among the 50 Emerging Global Outsourcing cities.
Jaipur’s average annual population growth rate: 3.60 per cent

Indore, the commercial capital of Madhya Pradesh, is home to hundreds of small-scale and large-scale manufacturing and industrial units in areas of automobiles, pharmaceuticals and textiles.

A major trading hub, it also has a rapidly growing presence in software, retail and real estate sectors.

Asansol in West Bengal is one of the busiest trading centres in India.

It is a coal mining hub, and has a swiftly growing industrial arena.

The city boasts of a huge workforce with its per capita income being much higher than many Indian cities.

Agra, the home of the Taj Mahal, is a major centre of small-scale industries and a growing hub for hospitality.

Agra has some of the finest hotels and spas in India. It has Uttar Pradesh’s first plant biotech company, Harihar Biotech.
It is also an important market for the automobile industry.
Agra’s average annual population growth rate: 2.93 per cent . 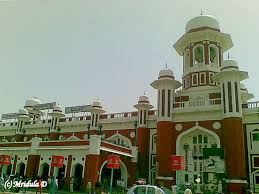 Lucknow, the capital of Uttar Pradesh, is home to many a huge manufacturing and industrial unit.

I am Rashid Aziz Faridi ,Writer, Teacher and a Voracious Reader.
View all posts by Rashid Faridi →
This entry was posted in India, Urban Studies. Bookmark the permalink.