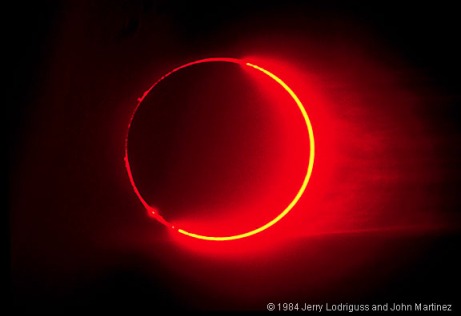 A solar eclipse occurs when the moon passes between the Sun and the Earth so that the Sun is fully or partially covered. This can only happen during a new moon, when the Sun and Moon are in conjunction as seen from the Earth.

A total solar eclipse is a spectacular natural phenomenon and many people travel to remote locations to observe one. The 1999 total eclipse in Europe helped to increase public awareness of the phenomenon, as illustrated by the

In ancient times, and in some cultures today, solar eclipses have been attributed to supernatural causes. Total solar eclipses can be frightening for people who are unaware of their astronomical explanation, as the Sun seems to disappear in the middle of the day and the sky darkens in a matter of minutes.

There are four types of solar eclipses:

An eclipse of the Sun (or solar eclipse) can only occur at New Moon when the Moon passes between Earth and Sun. If the Moon’s shadow happens to fall upon Earth’s surface at that time, we see some portion of the Sun’s disk covered or ‘eclipsed’ by the Moon. Since New Moon occurs every 29 1/2 days, you might think that we should have a solar eclipse about once a month. Unfortunately, this doesn’t happen because the Moon’s orbit around Earth is tilted 5 degrees to Earth’s orbit around the Sun. As a result, the Moon’s shadow usually misses Earth as it passes above or below our planet at New Moon. At least twice a year, the geometry lines up just right so that some part of the Moon’s shadow falls on Earth’s surface and an eclipse of the Sun is seen from that region.

I am Rashid Aziz Faridi ,Writer, Teacher and a Voracious Reader.
View all posts by Rashid Faridi →
This entry was posted in Solar System, Space. Bookmark the permalink.